This is the letter “V” post in The ABCs of Homeschooling Through the Holidays over at Upside Down Homeschooling. If you get a chance, go check out the site for great homeschooling ideas!

I have learned through the years that men, women and kids all have different visions of what Christmas is like. The men look at the tree and see a hassle, you got to bringing down the decorations, the unending torment of placing 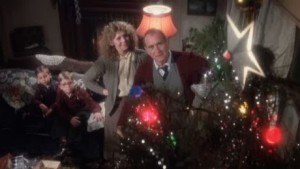 lights on a dead tree, rearranging furniture, and turning the tree to hide the hole on backside, wrapping presents and the clean up of all the torn paper that was never looked at in the first place. Then comes the time when you take all the decorations off the tree, small parts of dead tree are thrown all over the house, at least one decoration is lost each year in the tree, rearranging the furniture back to where it was in the beginning, taking the decorations back up in the attic, and the pain of sharp dead tree pieces sticking into your hands and arms when trying to get the tree out without spilling the water in the tree holder all over the floor.

Now the women see it as a totally different event. The joy of family being together, reliving memories of past Christmas times as we all place ornaments on the Christmas tree, the change of the room layout that brings attention to the tree that everyone is working on, the memories being made as everyone watches the dad crawl around on the floor trying to turn the tree and not knock it over, the smell of hot chocolate with peppermint mixed with the fragrant spell of the fresh-cut tree, the excitement of placing the Christmas dishes out on the table for the upcoming dinner, the look of the perfect handmade bow on a beautifully wrapped present, and the splashes of red and green throughout the house.

I remember being a kid and the excitement that came with Christmas. My dad had a “Christmas barrel” that everything was stored in out in the barn. We lived in a house with a wood burning stove and gas heat, which meant the tree, which was nailed to a piece of wood that was nailed to the floor, dried out very quickly! So with that, we got the tree about 10 days before Christmas every year. The anticipation that would build within me as a kid as I saw everyone else’s tree already in place would finally be relieved

on the day the barrel would come rolling out of the barn. Alvin and the Chipmunks would start playing on the stereo, then Burl Ives and finally Elvis. The tree was always huge since we had a 12′ ceiling in the living room. There were no little lights on the tree. We had the nice big lights that put out plenty of heat and light, and if one went out, you knew exactly which one it was! Then there was the attempt to sleep on Christmas Eve as you waited to see if the fruits of your labor of being good for the whole year had paid off.

Yet when you look at everything, there is one vision that I left out. That is God’s vision of Christmas, which is the real meaning and true vision of Christmas. God wanted to reconcile the sin of man and restore the relationship we had. This could only be done through a sacrifice that was pure, holy and sinless. So, God gave part of Himself as a gift to humanity. He came to this world in the form of a little baby. Not charging in and demanding attention, not with all the bright lights and parades, just quietly born in a manger to a young couple. God’s vision was for this baby to grow up just like everyone else, experience life just like everyone else, feel emotions of anger, love and joy. And then when called upon, He would make the decision within His heart to do God’s will and give the whole world the ability to restore the relationship that had been broken with God through His sacrificial death.

You see, vision can be a funny thing. We can all look at the same thing and see it different.
So this year, as the tree is lit, your family is getting ready to open presents, and you are all together in the same place, share the real vision of Christmas.

Holman Christian Standard Bible (HCSB)
1 In those days a decree went out from Caesar Augustus that the whole empire should be registered.
2 This first registration took place while Quirinius was governing Syria.
3 So everyone went to be registered, each to his own town.
4 And Joseph also went up from the town of Nazareth in Galilee, to Judea, to the city of David, which is called Bethlehem, because he was of the house and family line of David,
5 to be registered along with Mary, who was engaged to him and was pregnant.
6 While they were there, the time came for her to give birth. 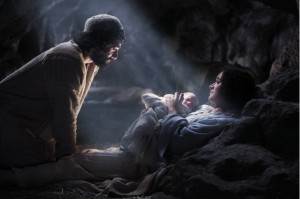 V is for Vision

7 Then she gave birth to her firstborn Son, and she wrapped Him snugly in cloth and laid Him in a feeding trough—because there was no room for them at the lodging place.
8 In the same region, shepherds were staying out in the fields and keeping watch at night over their flock.
9 Then an angel of the Lord stood before them, and the glory of the Lord shone around them, and they were terrified.
10 But the angel said to them, “Don’t be afraid, for look, I proclaim to you good news of great joy that will be for all the people:
11 Today a Savior, who is Messiah the Lord, was born for you in the city of David.
12 This will be the sign for you: You will find a baby wrapped snugly in cloth and lying in a feeding trough.”
13 Suddenly there was a multitude of the heavenly host with the angel, praising God and saying:
14 Glory to God in the highest heaven,
and peace on earth to people He favors!
15 When the angels had left them and returned to heaven, the shepherds said to one another, “Let’s go straight to Bethlehem and see what has happened, which the Lord has made known to us.”
16 They hurried off and found both Mary and Joseph, and the baby who was lying in the feeding trough. 17 After seeing them, they reported the message they were told about this child, 18 and all who heard it were amazed at what the shepherds said to them. 19 But Mary was treasuring up all these things in her heart and meditating on them. 20 The shepherds returned, glorifying and praising God for all they had seen and heard, just as they had been told.

I pray that your Christmas is one full of joy and happiness this year and that the true vision of Christmas remains within your heart all the year long.

Till next time,
I’m just a Husband of a Homeschooling Mom,
Steve Blackston