Today I awoke at 4:15 AM with nervous anticipation of what this day would hold. This had been a day that I had been waiting for a long time. It was a special day for my second son, Ethan, and myself. It was a day that he would be baptized, and baptized by me!

I was called to fill the void that my church had as a Children’s Pastor a few months back. My heart is for kids and their families. My desire is to see the family structure be solidly built upon God’s strong foundation and to grow in discipleship from its earthly father while he listens to the Heavenly Father. It is through this process that kids will have biblical principles instilled into them at home and prepare them for what the world will send their way. I only have kids in my ministry for three and one half hours a week, they are with their family each and every day.

This was the day that I have been waiting for as my second son would be baptized. I was there helping with my first son, Levi, as he was baptized a few years back. That was a thrill and a blessing to be part of that special day of his life. Today, I would be doing baptism for the first time as a Children’s Pastor with the kids from my ministry and one of them was my very own!

My son had already accepted Jesus as his personal Savior a few months back, but was a bit scared about the whole baptism thing. He did not want to go up in front of all the people of the church and have them looking at him. However this past December, we had the kids perform as part of the Christmas Cantata and he enjoyed it and was able to overcome his fear of people looking at him. The next day he said that he could do it and was ready to be baptized!

We got everyone ready to go and I was having to pick an order for the kids to go in and as time got closer I had two more come up and join us. One actually turned out to be a relative of mine that is sort-of far out on the tree branch of being kin. The adults were lined up and started in the pool and then they were gone! 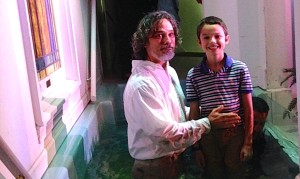 My son, Ethan, and I at his baptism.

Our associate pastor turned and said that it was time for the kids and I was coming in. All the nervousness, fear and panic that I had earlier simply faded away as I stepped on into the water.

I made it through the first three kids with no problem. As the fourth kid was brought up and turned to the exit side, I turned and looked up at my son standing there with his grin going from one side to the other side of his face. The only thing I could do was cry as I reached out for his hand to help him in, and to make sure that no cannon ball attempts were done. I explained to the visitors that this one kid was special today, this one is my son. There are many high points in a dads life, today, I hit a high that is unbelievable. Today I got to witness and be part of the fruits of my wife and mine labors. As I brought him back up out of the water, all I could do was stand there and hold him. In my head I was hearing the words from Matthew 3:16

Holman Christian Standard Bible (HCSB)
16 After Jesus was baptized, He went up immediately from the water. The heavens suddenly opened for Him,[i] and He saw the Spirit of God descending like a dove and coming down on Him.
17 And there came a voice from heaven:
This is My beloved Son.
I take delight in Him!