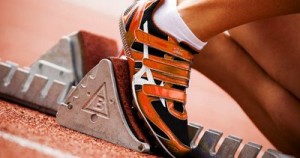 Are you prepared to run the race?

Hey dads, what do you do to “Get Set”? Well I guess it would depend on what exactly you were going to do, would it not? I mean if you were getting ready to go snow ski, I don’t think you would get the sun tan lotion out and put on a swim suit and head out to the pool. But where I live in Georgia, the weather changes so quickly, you might be able to do just that! We have talked about getting on your mark, now, let’s get set!

I hope that you have already been working at being on your mark, because that is how you go about getting set. There is a verse in the AWANA Clubs that fits well with this part.

Holman Christian Standard Bible (HCSB)
15 Be diligent to present yourself approved to God, a worker who doesn’t need to be ashamed, correctly teaching the word of truth.

To get set you have to study, prepare and be diligent. Think back when you were in school. The big test is coming up on Friday. Unless you were one of the photographic-memory kids, you had to study. If you were like me, you had to constantly study, a lot! I never was what you would call the sharpest tool in the shed, but I was diligent and determined to do the best that I could in anything I did. As a dad, this is even more true and needed.

But how do you prepare to be a dad? Even if you are diligent and even if you study, what prepares you to be a dad? God does. I remember when my first son was born, I was so scared all the way up to the point when I saw him and held him that very first time. It was as though a wave of peace washed over me and I was ready. This, I contribute to the fact that I had been reading my Bible on how to be a dad. Here are a few great verses that stick with me even now.

Holman Christian Standard Bible (HCSB)
21 Fathers, do not exasperate your children, so they won’t become discouraged.

Do not make riddles out of everything you do with your kids. Explain why and what you are doing so your kids do not become exasperated with the situation. Just a little explanation, goes a long way.

Holman Christian Standard Bible (HCSB)
4 Fathers, don’t stir up anger in your children, but bring them up in the training and instruction of the Lord.

Anger is a natural reaction to some of the things that happen in life. Teaching your kids how to handle the anger is the key. Nothing good has ever come of a dad making his kids mad at him or the family. Sit down and talk to your kids and let them be honest and open with you. Even if it hurts you.

What if God did not show compassion on us? If the first time, or even the seventieth time, that we made a mistake, he zapped us? If that was the case, I dare say that many of us would not be here to read this. Remember that with your kids. They are not perfect, but they are reflecting what they have been taught. (Ouch! That one hurt!)

Holman Christian Standard Bible (HCSB)
24 The one who will not use the rod hates his son,
but the one who loves him disciplines him diligently.

I never understood what my dad ment when he told me, “Son, this will hurt me more than it does you”. I understand it now. But to show love to my kids, there are times that I must discipline them. Just remember when you do have to do that dads, that you talk to them and tell them why you are having to discipline and never do anything when you are angry.

Holman Christian Standard Bible (HCSB)
20 So he got up and went to his father. But while the son was still a long way off, his father saw him and was filled with compassion. He ran, threw his arms around his neck,[a] and kissed him.
21 The son said to him, ‘Father, I have sinned against heaven and in your sight. I’m no longer worthy to be called your son.’
22 “But the father told his slaves, ‘Quick! Bring out the best robe and put it on him; put a ring on his finger[b] and sandals on his feet.
23 Then bring the fattened calf and slaughter it, and let’s celebrate with a feast,
24 because this son of mine was dead and is alive again; he was lost and is found!’ So they began to celebrate.

This is one of my favorite, the story of redemption. I have had to eat crow many times in my life. Sometimes I wonder if I have developed a taste for it. But the great thing is that God is a God of second chances and if our Heavenly Father can forgive us of our mistakes, why can we not forgive our kids. Yeah, there may be times when it hurts us deeply, but we can still forgive. This section of verses talks about when the son came home and admitted his wrong doings and how he was accepted back and it was celebrated. Notice that the father does not bash the son or get on his “I told you this would happen” rant.

Guys, it’s not an easy thing to “Get Set” to be a dad. We will have to hold back anger, words, thoughts and actions that would feel so good if we just let them fly out. However, if you were on the other end of the explosion, how would you feel? I want to challenge you dads to “Get Set” now that your “On Your Mark” and let’s get ready to go with God to be a great dad to our kids.

Till next time,
I’m just a Husband of a Homeschooling Mom,
Steve Blackston