Dad, when you survey your surroundings within your domain, are you a king or commoner? The difference between the two is vast yet so very short at the same time. To be a king one must have subjects who are loyal to him, listen and willing obey his laws, and will fight for him at a moments notice. Yet the commoner is just that, common, unknown, and has no title. So dad, which are you? 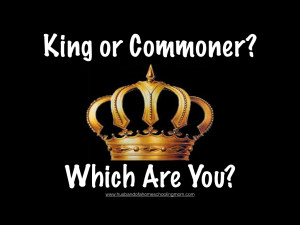 – the ruler of his domain and subjects within. The king sets the laws, settles disputes, listens to the people of his realm. Sees to the defense of his people and home at any cost. In return the subjects or people of the realm are loyal to the king. They listen and are willing to do what the king ask of them. They will stand up for the king and uphold the laws that the king has set for them no matter where they may be at the time. You see, the king has such a huge impact on the lives of the people within his realm, that no matter where the people go, the words of the king still ring within their very being. Even without the king’s physical presence, the people still follow him and hold to the values of the king.

– has no structure, no title, or no followers. They exist to watch the world go by them and do not try to cause problems with anyone. They stay removed from anything that may cause them to work above what they think is right. The serve themselves and conform and are quite content to stay that way. There is no group of followers that are listening to the commoner. Their words are said and fall upon the deaf ears of anyone that is nearby. They do nothing that is extraordinary and are seen as not a threat by anyone, yet can be used by another ruler to attack your kingdom in ways that is subtle.

In our homes there is a structure that should be defined and followed. There is the Dad (King or head of household), Mom (Queen or help meet to the Dad), and children (Prince / Princess or Blessing from God). In many occasions this structure can become offset and out of align. In doing such, the realm becomes unstable. Soon their are riots, uprisings, and the authority of the king is challenged. I mentioned another ruler earlier. This ruler is from another realm and is attacking your kingdom dad. This is an ongoing attack that at times we do not see it happening until it has hit close to us. We may not take it seriously unless it actually destroys part of our kingdom, or even one of our family. This ruler is Satan and one of his jobs is to cause discord and disobedience within our family. If you allow satan to enter within the realm that you are charged with (your home), you are asking for problems. His tactics can be so subtle and unseen at first unless we are on our guard.

Dads out there, I pray that you are on your guard for your realm. That daily you are on your mark and preparing for the race that you as king of your realm will be running each day. Protect your realm, your castle and your subjects from the flaming darts that will be thrown at you! Don’t be common and conform in this world for God has plans for you that are great!

Holman Christian Standard Bible (HCSB)
2 Do not be conformed to this age, but be transformed by the renewing of your mind, so that you may discern what is the good, pleasing, and perfect will of God.