Men, do you know your power?  I am talking about influential power, not physical.  We as adults have a great ability to influence those around us, especially our kids! 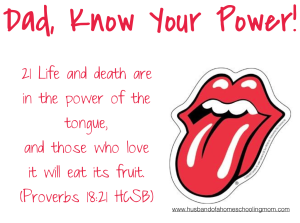 I have kids that at times can get on my last nerve when I ask them to do something around the house.  I will stop and look at my oldest son and clearly state the objective that I need accomplished.  I will then turn and go back to my task that I am working on.  Later I will look up and see my son doing something else that has absolutely nothing to do with the job I asked him to do.  I will go over and look to see if by some means of super-human speed he has accomplished it without my knowing.  This of course has yet to happen.  I will then look at him, shake my head and do the job myself after I usually berate him in some way.  Afterwards, I sit there and put another point in the “Dad’s was a Jerk” column of my fatherhood scorecard.

What do you think happens to my son’s self-worth at that point?  He just took a huge hit to a few parts of his being.

~ a feeling or deep pleasure or satisfaction derived from one’s own achievements.

My son is like me in some ways.  He will at times shake his head and tell someone that he completely understands what is to be done, and in reality have no concept of what is going on.  We will then try to do what we think is requested and then give up.  We allow our pride to stand in our way of doing what needs to be done by not asking for clarification.  We as dads need to show that our pride is something that needs to be removed at times and we need to ask for help when we need it.  This is something that we don’t like to admit in front of our kids, especially our sons.  But unless you want to pass along a legacy of hardheadedness and pride, start swallowing your own and let your kids see when you do so.

~ is a term used in psychology to reflect person’s overall emotional evaluation of his or her own worth. It is a judgment of oneself as well as an attitude toward the self.

I visited my campus minister this past week and this topic was brought up and it struck a nerve with me.  He told me of a young man who was given a job, a responsibility, a task to carry out.  When he was given the job, it was assumed that he knew what should be done.  The young man was 26 and was given what would be considered a simple job of raking leaves away from a house.  The problem was that this young man grew up in an environment where he never had to do this type of work, seen it done, or even heard of it.  So when he attempted something  and he did not see it doing any good, he quit.  He did not see that the responsibility he was given was important and how it effected everything else that was being done at that time.  This in turn made others who were performing there task in a responsible manner look down on him and his self-esteem plummeted.  To correct this, it would have only took someone to setup and show how to do the job, watch him for a minute or two and give correction if necessary and then move on.  He would have been able to complete his task and grew in his self-esteem.

Dad, I want you to take some time today and do something that may be one of the most painful things you have ever done with your kids.  Sit down with your kids on a one on one basis and ask them this question.  “What your thoughts are of me as your dad?”  You should most likely precede that question with telling your kid to be completely honest and straight to the point.  Be prepared for anything and everything.  Don’t question, needle, or do a dance of joy when you start getting a response.  This is where swallowing the pride, showing how to do things, taking time, answering the same question for the 23rd time, and showing grace all comes to a point. Listen to your kids when they talk to you and thank them for opening up to you. Then walk away and pray about what you have just heard from the mouth of your kids and see where you as a dad need improvement.

So many times this simple verse from Job needs to be our prayer. When we listen to our family and learn what we are saying and doing we will start to understand. The power that we hold within that little muscle between our teeth.

21 Life and death are in the power of the tongue,
and those who love it will eat its fruit.
(Proverbs 18:21 HCSB)

Use it wisely dad, some fruit can be deadly!

Till next time,
I’m just a Husband of a Homeschooling Mom.
Steve Blackston