Hey guys! Wow and what an amazing time we are having so far. If you don’t know what is going on, we are heading up to Washington, DC for the Teach Them Diligently Convention! This is making a great road trip with the kids and the Allen family (www.Conversaving.com).

We left on Wednesday morning at 5:30’ish. Of course this was the time we were to be meeting up with the Allen’s and it was my fault of making us late. Anyway, after making the connection we were on the road as a small caravan in the mini-vans. Mr. Allen (a.k.a. David) made the trip plans for our adventure northward to DC and true to his word we learned a bit of history along the way.

Our main stop along the way brought us to the seemingly quiet town of Mount Airy, North Carolina which is home to the Andy Griffith Museum. 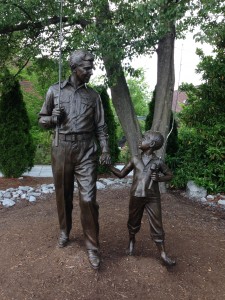 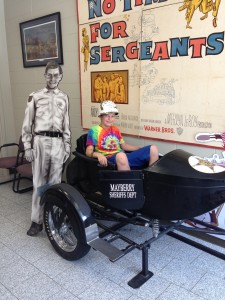 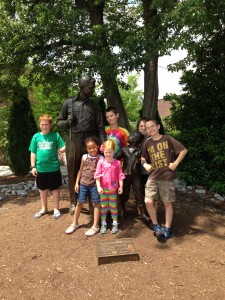 I will confess, that I have seen all 259 episodes of “The Andy Griffith Show” thanks to Netfilx. Going through the museum will bring back a flood of memories from the shows. You get to see Barney’s “Salt and Pepper” suit, Otis’s two hats, the jail keys (even the one that cousin Virgil cleaned), the door plaques on the front of the courthouse, the side car for Barney’s motorcycle, and more pictures than you can imagine. The self guided tour was $3 a person and kids 4 and under are free. For fans of the show, I would highly recommend making the trip to stop by.

Now, along with the Andy Griffith Museum, there is another attraction that is associated with Mount Airy, North Carolina. The Eng and Chang Bunker exhibit is located at the lower level of the museum. Now, if you have not heard of these two people, you are like myself. As I stated earlier, Mr. Allen planed this part of the trip and he is a bit of a history buff and keeper of eclectic facts. Eng and Chang Bunker were born in Thailand on May 11, 1811. The two boys were joined together by a 5″ piece of flesh around the lower ribs. The boys lived normal lives and worked on their farm helping the family until they were seen by a British merchant and an Sea Captain who took them on tours across the world. They soon became known as Siamese twins since they came from Siam (now Thailand). Later they declared their independence after fulfilling their contract with the Merchant and Sea Captain and eventually made their way to the Mount Airy area and became successful farmers and good citizens.

After the great stop, we continued our way up through scenic North Carolina and into the edge of Virginia were we made our stop for the night in Chester, Virginia. The Country Inns & Suites provided a wonderful bed and pillows (at least to me). The indoor pool also provided a way to unwind the kids so they quickly went to sleep after a day of just sitting.

So today, we finish our journey to DC! This is something that we as a family have been looking forward to for many reasons. The wife and I are looking forward to the encouragement and insight into homeschooling from others who have been doing it and are what others call the “Pros”. The kids love the children’s program! Afterwards, we begin the tour of DC since we just finished two years of American History and there is a lot of history there.

Also, tonight, there will be a life video blog from the convention center, so check back for further details on that happening!

Till next time…
I’m just a Husband of a Homeschooling Mom,
Steve