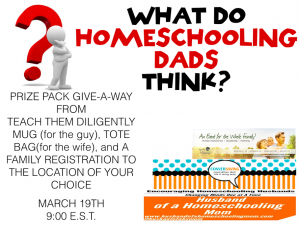 We did it! The podcast that we hoped would go at least 30 minutes, went to over a hour. There will be at least two more podcast coming up. The next one will be in April and quite possibly from the Teach Them Diligently Convention in Atlanta, GA. So be on the look out there for us! We may even pull some random dads in on the conversation. The winner of the family registration to a Teach Them Diligently Convention will be announced later today (Friday, March 20th).  But in case you missed it live, here it is.

← Words Last Past a Lifetime
Time Keeps on Slipping… →