I heard some words spoke to me this past weekend at the Atlanta Teach Them Diligently conference that hit me to the core. Mr. Norm Wakefield was speaking on “The Most Powerful Words Ever Heard”. I liked his past talks so I thought I would give it a shot. I had no idea that what he was about to say would hit me like it did and show me how I was forsaking my own kids!

I have had the pleasure of raising three kids to what I called the best of my abilities. My two boys and my daughter have been at the center of my fathering and teaching. However my teaching abilities were those of a drill sergeant and not those of a nurturing parent. You see, I would speak what I wanted and I stand back with exceptions of perfection to be performed by my kids. I expected my words, previous experiences, thoughts, and actions to suddenly download into my kids head and the desired output to be performed without any questions. Then when it did not happen like I thought it would, I would start into my drill sergeant persona which never ended well. Now, I know that none of you other guys out there have never had this problem.

However, this is where those powerful words that Norm was speaking about come into effect. If you read Joshua Chapter 1 you will see that God was speaking to Joshua about the death of Moses and what was happening next. But there is one verse in particular that had to give Joshua hope, comfort, and the ability to go on. Joshua 1:5 has the words that Joshua needed to hear. That verse also had words that your kids need to hear from you dad.

5 No one will be able to stand against you as long as you live. I will be with you, just as I was with Moses. I will not leave you or forsake you. 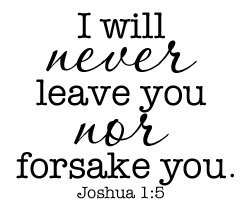 Are You Forsaking Your Kids?

When this was presented to me this past weekend I saw myself as temporarily leaving and forsaking my kids when I would go into my sergeant role. I know that the kids need to learn to think on their own, however, that comes after being shown a time or two. Now my role as the dad is to give my kids a task and then walk alongside them as they do the work. To explain how it is done, to never leave them or forsake them. Which is why I am asking you dad, are you forsaking your kids and calling it teaching?