Happy New Year to all the homeschooling dads out there, and the rest of you who sneak around and read these thoughts. Last year was a crazy and fast year! That is the reason that I was out-of-pocket for a while. I took time off of blogging to spend it with the kids and the homeschooling mom. Much needed time!! I know…I know that I left the homeschooling world in suspense for every bit of 12 seconds. So without further wisecracks, let’s get to it. 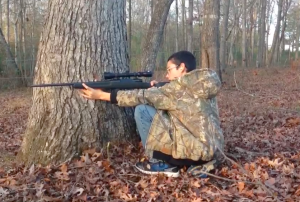 Well today I took my son Ethan out to do a little shooting with one of his Christmas presents. The boys both got a Savage Arms .308 bolt-action rifle with scope mounted as gifts. Deer season sneaks out this weekend and hopefully he will get a chance to make use of his rifle. Now, most men who have ever sighted in rifles know that you have to set a few parameters in place before sighting in a rifle. You need a good firm base or rest to prevent shaking. You have a defined distance to make sure proper adjustment to the scope. You control your breathing and heart rate. And finally, take the shot! Us? We nailed a target to the tree about 125 feet away and started shooting!

Ethan got the honors of shooting first; it is his rifle after all. Then he wanted me to shoot to verify the accuracy of his shot. “Hmmm…the boy is thinking.” I loaded a round in the rifle and sent it toward the target. It was about one inch off of his. We adjusted the scope and he went again. The position was about right for the adjustments that I made from my shot, so I made a clicked off a few more spots on the scope and took a shot. Not bragging, but I got a bullseye. So, I proudly proclaimed that the scope was set.

Now, not only did I bring a paper target but I also brought two clay targets that we use when skeet shooting. I took the clay target and laid it up on the high tech target holding apparatus (2″x4″ piece of scrap wood nailed to a tree) and asked him if he could hit it. Without any hesitation, he replied with “Since you got it sighted in, yes sir!” We went back up the hill and he aimed and squeezed off a round.

[kaltura-widget uiconfid=”37863422″ entryid=”1_7jcy5zil” responsive=”false” hoveringControls=”true” width=”360″ height=”640″ /]
As you can see, he hit it!! We walked down to the target and saw where he struck it almost dead center. I proceeded to tell him, “I think that was a fluke. You just got lucky kid.” So, we placed another target on the high tech apparatus and made our way back up the hill. He loaded the rifle with the round, took his position, controlled his breathing and made took the shot. This time, it was him who was bragging.
[kaltura-widget uiconfid=”37863422″ entryid=”1_bpso00yq” responsive=”false” hoveringControls=”true” width=”360″ height=”640″ /]
Now, did you listen to him at the end of the last video? “Apparently it wasn’t a fluke.” As we were walking down to the targets to clean up, all of this hit me. The blog post, the point, the lesson for me and maybe you. Guys, when we take time and teach, show, demonstrate, live intentionally, and set the example for our kids, they will follow in our steps. Ethan said it best when he said that he could hit the clay target. He trusted my judgement, and knowledge on what should be done and went with it. There was no guessing if dad had done it right, or if it needed to be changed, or if I had cheated. He took my advice and used it. He followed the path set before him.

Men it is time that we think, take time, and intentionally lead our family in all that we do. This year is new and many people set goals or make resolutions. If you are doing that, make this goal and resolution for your family.

If you are willing to take that pledge and make that resolution or goal, leave a comment below so you can be held accountable and show that when you set the example that when those behind you come along and do things right, others will say “Apparently it wasn’t a fluke!”