As I lay sleeping, this post will be going up on this 13th day of May, 2013. Some 40 years ago (that’s two score) I was born into this world. I grew up in a house with cows, chickens, dogs, cats, a hamster, a monkey, a skunk and who knows what else. I grew up in The Rock, Georgia, where I still live today. I still live overlooking the same road. My parents divorced when I was around 10 and I spent most of my time with my daddy. Since then they have both remarried to great people that I am honored to call part of my family.

I graduated from high school in1991 and headed out for college. Headstrong and determined that I was going to be the first in the family to make it through. My second quarter came around and I was kicked out! Something about needing to study a bit more than I did. I came home after the president of the college told me “Son, you need to go back to the farm and shovel that chicken crap out of the houses, cause that is all you will be good for.” Well, I came home, started over at a community college and later transferred to another college to finish up. In 1998 I graduated from Southern College of Technology (Southern Polytechnic State University) with my BSCET degree. However, if needed though, I can still shovel when my daddy calls me.

I got married to the best woman in the world in 1999. On June 5th at 3:00, Nichole walked down the aisle to “Saturday In the Park” and we were married. I remember the pastor make me say a rhyme at the end of the wedding : “As long as the rabbit runs around the stump, you always be my darling sugar, honey lump.” Evidently that rabbit is still running around the stump somewhere because she is that and more to me still.

In 2002 I became a father to a boy, Levi. I remember the first night we brought him home, he quit breathing on us and started turning blue. His airway was still getting blocked from mucus in his lungs, so we went back to the hospital again for another whole day. By the end of this ordeal, I had not slept for some 48 to 50 hours. A year and a half later my second son, Ethan, was brought into the world. I was trying to figure out what I would do with not just one boy, but now two! Things went smoother this time around and those two boys are just about inseparable today. In 2008 my wife calls me up while I was away in training and asks if I wanted a baby girl. “She is 14 hours old and needs someone.” I remember her saying over the phone. May the 8th of 2009, just before Mothers Day, the adoption was final and Ella became my daughter.

Today I am a man with a wife that is out of this world and three great kids (10, 9 and 4). I am a man that God has so richly blessed with family and so many friends. We celebrated my birthday on Saturday, since the kids wanted to do me a breakfast and give me time to play with my toy (new Echo weed eater)!! 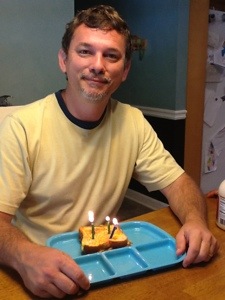 I say all if this to tell you that I am a man that God has so richly blessed. He has taken care of my every need and loved me through everything. He knew what I would need even before I was born and He provided for me. My God is an awesome God and has granted me peace, patience and understanding to be a husband of a homeschooling mom and I can’t wait to see what the next 40 years have in store!