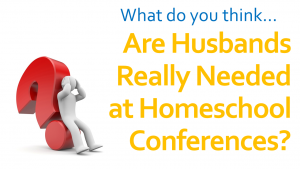 This will be my 5th year attending the Teach Them Diligently convention. It will be my 4th year as a blogger talking about the guy’s perspective in homeschooling. I’ll be honest, it is not always easy being a dad in the homeschool environment and trying to discuss homeschool stuff. Most men are out there on the fringe, or the edge willing to help some if there is no other alternative. And the things that I have said here are not meant to make the men look bad, but to tell the truth.

So, to answer the question of “Are husbands really needed at homeschool conferences/conventions?” YES YOU ARE!  You are needed there by your wife, your kids, and also for yourself. This year there will be some great sessions in Atlanta and the remaining areas. Men, I want to invite you to come and hear what is said, to see what all is going on, and be part of the homeschool that is happening in your house. If you have not registered yet, please do so now. Surprise your wife and kids! There will be classes for your wife, your kids, and you. If you make it to Atlanta, and see me, throw your hand up and give a high five, because you are not alone dad, you a husband of a homeschooling mom! Be proud.