The air was warm…the excitement level was high…dust was string in the evening breeze. Kids were being corralled on one end of the field in anticipation of what was about to occur. As you looked to the opposite end of the chiseled plowed, hard clay field, there sat a cow trailer with this evenings victims. This was the yearly event that has taken place for as long as I remember. That special weekend in September where the residents of Lamar and the surrounding counties gather for the Barnesville Buggy Days Pig Chase!

Here is a little background of what Buggy Days is all about:

Barnesville Buggy Days celebrates Barnesville’s heritage as the Buggy Capital of the South during the late 1800′s. We have been awarded the distinction of being a Top 20 event in the Southeast for five out of eight years, often featured in major publications such as “Southern Living” magazine. Buggy Days is held on the third full weekend in September.

Now one of the major events happens on Saturday evening. It was a time when in days gone by, the participants would walk up to the football stadium which was located almost downtown and there were games for the kids to play. One of the crowd favorites was the greased pig chase. This event is where a small pig would be covered in grease and then released onto the grass field where a small horde of kids would provoke the pork to run in the hopes of an escape.

Now to catch a greased pig is much harder than it sounds. The next time that you are sitting around the house with nothing else to do, take some Crisco and slather it on your neighbors cat and then run at the cat while screaming and try to catch the fleeing feline. This would be similar to the activity that has become a pastime of the Barnesville Buggy Days Saturday night.

My boys have heard about the pig chase and thought that this year they would help out the family by catching a pig. They were wanting to do their part and contribute to the food needs of the house. That is what they said. What they meant was “I want a large pile of bacon all for myself that I caught!” Once they heard that the weekend had come when they had the chance to claim their pork prize, they begged to go. So, with my memories of childhood within my head, we headed out for the “old Fashioned Games Night”.

After heading out toward the place of my youth, we suddenly realized that the “playing field” had moved. The new location is now the Lamar County Rodeo Arena. A nice clay packed arena that has recently been chiseled plowed to make the “playing field” a bit softer to the participants (those chasing and being chased). We follow the line of cars pouring into the fresh cut pasture and meet up with Mr. David Allen of Conversaving.com and make our way into the place of pork pulverization.

Prior to getting to the pig chase, we stopped in at our local grocery store and purchased a few drinks for the kids and ourself in an attempt to save some money. While we are standing in a line along the side of the roadway, people are making their way back toward the parking lot saying “Down it or take it back man”. The closer we made it to the point of convergence into the event, we start making out a sign that states all outside beverages and food is prohibited. This in turn brings about a chug fest between the men and the boys. To which the wife steps in and takes the drinks away from the boys and starts walking back to the truck so they are not complaining with stomach aches. Did she worry about me? Nope. Just watched me chug it on down. Now that is love!

Mr. Allen and I, along with the kids, continued to make our way to the entrance. Upon getting there we are met with another sign. $3 per person. What?!? They charge now?? Old Fashioned Games my foot! They used to be free and that is what I call old fashioned. Then David looks at me and knowing the frugalness of my wife states “She is not going to be happy”. This was an understatement. The lady that cared nothing about coming out to a pig chasing on a hot evening, not letting her bring in her drink, and then charging her to go somewhere she did not want to go…we were glad that she took the drinks back. Forking out $12 and trashing my now empty bottle in the can, we entered the epicenter of Redneckness. (Yeah, I just made that word up.)

Making our way through the crowd, the boys see where they need to go for their chance at a pork prize. However, getting there requires $1! Subduing my Yosemite Sam mumbling fit as my boys stare into my eyes with anticipation, I pass over $2 for them to split. As David does the same the kids disappear into the mob of kids from 4 to 16. This youthful group is chomping at the bit to be released into the arena and grab their moment of glory.

David and I make our way through the throng and find a seat on the bleachers and prepare for this event to begin. Once we find our prime pork peering perch, the phone rings with my wife on the other end. “$3 to get in here!?!” To which the only reply is “Yes it is baby. I’ll pay you back, just come on in. We are in the last set of bleachers at the end.” While explaining this to my wife, David is cracking up at my current predicament.

This event finally begins to come to fruition as the pork parade soon begins. This evenings prime pork peddler is chauffeured around the edges of the field while holding the pig so the onlookers, such as myself, can get a better view of the prize. Once this is complete the soon to be prize pig is put in the middle of the filed after being covered in Dawn and some water and a nice lather is developed. During this time the kids are lined up across the field at approximately 100 feet away. The look of determination is etched in some faces, others appear to care less if they catch and bring home the bacon. The rest is best left to video…it becomes hard to describe the carnage that follows. 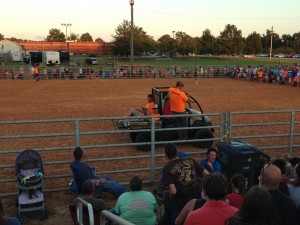 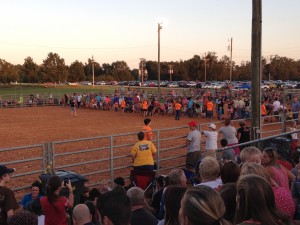 As you can see above, it is something that the next Survivor TV show may even incorporate into their next challenge. Dozens of kids take off to chase down the lone pig who is “thrown to the wolves” in hopes of surviving. This rooting runner did fairly well compared to the others who came after him. This continued into the night with ages ranging from Pre-K, 5 & 6 year old, 7 & 8 year old, 9 & 10 year old, 11 & 12 year old, 13 & 14 year old, and then 15 and above. Each of these age classes had 5 rounds of pigs to be chased!

So, what did I learn on this evening?