Dads, are you looking for a quick escape? Now this may not be what you are thinking about so hear me out completely. My son came to me a few months back telling me about this new thing called an escape room, so we gave it a shot this afternoon. That one hour escape, felt like it was only 15 minutes.

We arrived to the Amazing Escape Room location in Peachtree City about 10 minutes early since we had no idea what to expect. The outside looks rather simple enough with just a sign. Once you enter, you start to sense a need to do puzzles and games. One wall is covered in board game boards, and puzzle games are sitting around for you to solve. I purchased our time online and I only had to sign a waiver prior to entering. Now this waiver was to verify that we understood that there would be sound and noise coming over speakers, that we would be watched during the event, and lastly that you may feel stress while in a smaller room attempting to solve puzzles under time constraints. With a quick typing of my name and a scribbled signature on the iPad, we were ready to go! Rules were reviewed with us, questions were answered and then we walked down the hall to a 10′ by 12′ room and the door was shut behind us knowing that a F5 tornado was about to hit Atlanta and we had to save the historic artifacts in the building and Race the Storm!

There were locks, padlocks, bike locks, letter locks, magnetic locks, cryptex to solve, switches to flip, mirrors to figure out, hidden doors, hidden clues, clues in your face, one of the souths favorite refreshments, talk of cotton, Hank Arron, and Gone with the Wind. With this escape room, you are going to learn a lot of the history of Atlanta and Georgia and do so quickly (at least within 60 minutes). Now none of these things required heavy lifting, electrical knowledge, or reaching to the ceiling. As we were told “if a 7 year old can do it, then you can do it.”

We jumped in on the first locks as the timer starting counting the sixty minutes down on a television monitor. With this being our first escape room, we were a bit clueless on what to do first. Soon clues starting appearing, understanding started taking place, and we were on our way to escaping! When we would get stuck we can ask for a clue and within one minute a hint would appear on the monitor. These hints at times would not make any sense at the beginning, but then the lightbulb would come on (or off) and we were another step closer. Within the last ten minutes we started hearing the tornado warning sirens and we knew we had to speed up to save all the artifacts. 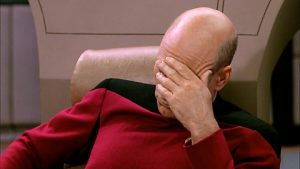 When it was over, we were swept away with the F5 tornado and so was all the artifacts! We made it to having 5 out of the 7 as the timer ran out. The door opened and the gentlemen who gave us the instructions came in and officially told us that we did not survive. However, they were gracious enough to go through everything with us and show us the remainder of the room. That is the moment when you feel the face palm starting to happen as you see how close you were and how simple the ending was. 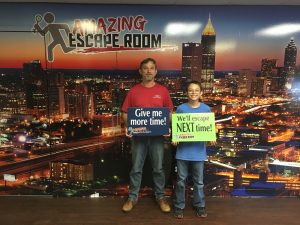 This is something that all dads need to try with your kids! You just might see a side of your kids that you never knew existed. You will both have to work together and separate to solve puzzles, find clues, and make it through. Also, every now and then we all need an escape, this is one you can share with your kids and family as you all work together. We are going to return to attempt The Atlanta Bank Heist where you have joined a notorious crime syndicate and your mob boss has a job for you to prove your worth, rob The Atlanta Bank. You only have 60 minutes to acquire as much cash as you can from the bank vault before the cops arrive! Can you escape? More importantly, how much loot can you get first?